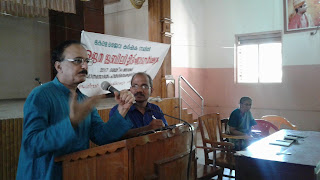 Today on May 14th 2017, I attended the silver jubilee celebration meeting of Kerala Jaiva Karshaka Samithi at Brahmanandodayam Higher Secondary School (BHSS) Kalady. This was started by CRR Varma and Prof. John C Jacob and had played an important role in popularizing organic farming in Kerala. Typically it used to be 3 days meetings, but this time it was just for a day and couldn't see many veterans like Dayal, Tony Thomas etc...But the next generation is pulling it along.

In the after noon session, there was a talk by Devinder Sharma, thought of sharing some of it which I still remember...The figures given here are from my memory, if there is any mistake can be corrected.

"Indian cow breeds are not given any respect here, but countries like Brazil has been exporting Indian breeds. Indian breed Gir produces milk of 75 litres per day, there"

"GDP growth means some destruction is happening, when trees are cut, GDP grows, rivers are polluted GDP grows, when you buy a car, fills the petrol and people get sick by environmental pollution GDP grows..."

Every year around 12,000-15,000 farmers commit suicide in India, but none of them are organic farmers. But if there is no decent income, soon even organic farmers will commit suicide. Minimum Support Price (MSP) of paddy for year 2016-17 was Rs. 1450 per quintal. Every year only a very nominal change was made, while goverment employer's salary is revised substantially.

If we take up an 100 times increased, then the price of paddy should be 5100/- per quintal. Devinder Sharma is asking, why this is not done? Why the government is not protecting the interests of farmers while government employees are taken care of?"

He says, in the next election all parties should put this as the prime agenda. We all are responsible to make sure that this happens."

I found this to be an interesting thought....
Nandakumar, Palakkad